We are looking at lessons from John Leonard’s book evangelism called, “Get Real.” In his opening chapter, he poses the following story and commentary as the over-arching principle:

“I have a problem,” began the young lady as she took a seat in my office. “My sister is coming to live with me and her life is always just one step away from tragedy. If anyone needs Christ, my sister does.” She continued, “We used to be close when we were younger, but then we went our separate ways. I became a believer and she became a skeptic; she completely rejected the faith we both grew up in. We haven’t had a lot of contact the last few years, but now she is coming to live with me! I’m worried; I’m worried because I want to share my hope with her, but how can I when I struggle so much and am filled with doubts and questions myself? How can I speak boldly about my faith?” “Why don’t you begin,” I responded, “by telling her about your doubts? Tell her about the struggles you have.” “I can’t do that!” she gasped. “I want her to believe. I want her to know the truth of the gospel.” “So you want your skeptical sister to believe in a way that you yourself do not believe?” I asked. “Have you ever considered that the way you present yourself as a Christian might be part of the reason your sister doesn’t believe? Non-Christians are often more honest than we are. Perhaps she sees in you someone who never questions, doubts, or struggles. What she may be rejecting is something she believes is unobtainable for her—a faith that is either blind or naïve. Instead of being a help to your sister, you may be her biggest obstacle to belief because she can never imagine herself believing like the person you want her to believe you are. “Why don’t you try being normal, for Christ’s sake? Share your doubt and struggles with her. Let her know that you’re a bit of a skeptic yourself. But also share how good the Lord is to you in the midst of those difficulties and how he is your strength, even in your doubting.” We all have family members, friends, and neighbors we want to share the gospel with. Perhaps you had someone in particular in mind when you picked up this book. And yet you feel that you can’t be honest with them about your own struggles and doubts because that would somehow weaken the gospel. However, the opposite is true. When we’re not honest about our struggles and our faith, we distort the gospel, and in fact may be putting false barriers in the way of those we are so anxious to bring to Christ. We want people to see Jesus in us when it would be so much better if they instead saw someone in need of Jesus. Therefore, for Christ’s sake, be normal!”

In this chapter, Leonard uses “be normal” in 2 senses. The first above is in regard to not presenting yourself as a “super Christian.” Be normal, in the sense that everyone has struggles, doubts, and questions they can’t answer. Here’s how Leonard puts it:

“Christians, too often, live under the guilt of not being “Christian enough.” We all believe that if we were better, people would see the Lord in us, and they would give their lives to Christ. The truth is that our example to those who know us best is not what we would like it to be. Therefore we overcompensate in two ways: either we try harder to be Christian, or we witness more to those we love. Thank God our nonbelieving family and friends really do love us because they keep putting up with us. In our desire to show others how different we are because of Christ, we’re not making ourselves any more appealing to the nonbelievers around us. In fact, we are presenting ourselves as weird, strange, and bizarre. So stop it! For Christ’s sake, be normal. When we’re normal and open about our difficulties and struggles, Christ in all his power and glory will come pouring out of the cracks in our lives.” With non-Christians, we must go so far out of our way to be normal that we are the uncomfortable ones. We must work at being normal so that others can imagine themselves being able—and by God’s grace, deeply desire—to be followers of Jesus.”

The second way he uses it is more in line with what we might first think when we hear the word “normal”—normal in contrast to weird. Now, Leonard here makes an interesting (and perhaps unexpected) point that is really helpful and we need to quote it at some length before we discuss it. We might think he would just say, OK, you Christians be normal and not weird so people aren’t turned off and may be drawn into Christianity. But rather, what he says is we are to be weird (or crazy is his word) in regard to our obedience to God and our relationship with him. If an unbeliever is going to call us crazy, it should be in regard to that aspect—going to church instead of some other activity on a Sunday, not participating in questionably moral behavior, etc. This is the vertical scale (Godward) and we should expect to be called crazy and weird. On the horizontal scale—with other people, this is where we can strive to be “normal.” Let’s let Leonard explain. He starts with this grid. Take a minute to orient yourself to the Godward/Vertical and Manward/Horizontal and that each box pictures a way to express Christianity and then continue on for Leonard’s explanation. 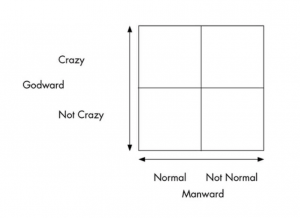 “The result is that we can express our Christian faith in four different ways, three of which can negatively affect our witness before those around us. Let’s look at the different ways we can live out our faith in these two relationships. The first way (bottom left) is to be “not crazy” in our relationship with God, but to be completely “normal” with those around us. In other words, there is no difference in the way we live our lives from the non-Christians around us. We are so normal that our non-Christian friends have no idea that we are Christians—because there is no evidence of a living faith. Those of us who fit into this category are often referred to as nominal Christians. If your life falls into this category, you are having no impact on others because there is no evidence of what God can do in your life. The second group (bottom right) is made up of those who are “not crazy” and “not normal.” There is no evidence of faith in their spiritual lives, but at the same time these people are just weird. When my daughters were in high school they called people who fit this group “geeks” or “nerds.” They are the kind of people who make you uncomfortable just being around them. They lack any social graces, don’t know how to dress, and don’t know how to act around others. They believe people are avoiding them because they’re Christian, but people don’t even necessarily know they’re Christian. People avoid them because they are weird.”

“The third group (top right)—“ crazy” but “not normal”—is the choice that most of us believe is the proper way to live the Christian life. We have a relationship with God that is evident; we have a faith that impacts our daily lives; and we are different from the world around us. But this is not the balance that Paul is setting before us. Two examples will demonstrate what I mean.”

“It is the fourth category (top left) that most impacts the world. These people have a relationship with Christ that makes them different—“ crazy” to the people around them—but who, at the same time, go out of their way to not be weird. They work hard at being like their neighbors in the nonessentials, so that people can imagine that they too can be followers of Christ in the essentials.”

In his book, Leonard gives a couple of examples of “being normal” in the manward/horizontal sense. They deal with holidays and cultural events on the calendar. You may or may not agree with every example. You are free to read the book to consider them. But for now, it’s the principle that’s important. We may disagree on the exact details of how to live it out, but what do we think of the principle—be crazy in relation to how obeying God makes you look, and be normal in regard to living as neighbors, friends, and co-workers on the things of everyday life? That’s what we should be discussing. What does that look like? What would need to change in your life? Can we even think of examples?

Questions for Thought or Discussion

1) Think of some practices in your life that unbelievers think are crazy—-some they made have told you, some you may need to really think about and get in the mindset of an unbeliever……which ones are you crazy because you are obeying God and which are you crazy because you’ve created a cultural barrier by not being interested in things your unbelieving friends or neighbors are interested in? The obvious caveat is things they are interested in that are lawful for a believer—for example, a popular TV show that is “clean” but may not be your thing.

2) Are there things in your life that are adding to the “craziness” of your Christianity to those around you? If so, could you make a change to be more connected to family, friends, and neighbors that doesn’t go against your conscience but just your preferences? Might be worth pushing yourself to the boundaries of comfort when you are thinking about these things and not just say, “nope nothing I can change. I’m a model of obedience and consistency in all areas of my life.”

3) What do you think of Leonard’s comparison above between the last two expressions of Christianity—A) The third group (crazy to God but “not normal” toward man vs. B) The Fourth category crazy to God and normal to man. He claims we are prone to think A is the right choice, when it’s actually B. What do you think? Is he crazy? Do you see this in your experience?