This is week 2 with Jeff. If you didn’t read last week, here is more about Jeff or skip down to the final portion of the interview.

Jeff De Boer is the pastor of Redeemer OPC in Ada, Michigan. Prior to this pastorate, Jeff 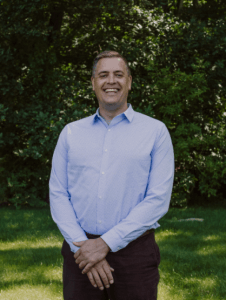 pastored in the RCUS, PCA, and URCNA varying across rural, suburban, and metro areas. He is a graduate of Mid America Reformed Seminary and studied law at the University of Iowa. He and his wife, Karen, have 5 children ranging from two college-aged down to 3 younger school-aged children.

Here are his responses to our final 3 questions…

For a time I participated in some Acts 29 church planting meetings. At one of those meetings a church planter mentioned something that seemed rather striking at the time but upon reflection is a perfect consequence of good biblical theology. This church planter suggested that rather than trying to create all kinds of new opportunities to evangelize, we simply consider the way in which God has uniquely created each of us with our strengths and weakness, likes and dislikes, and we use those creational realities in seeking those who do not know Christ. For me, that might mean joining a group to ride motorcycles or bicycles. For others, it means gaming groups, biking or running clubs, or something totally different. Live life with other people rather than seeking to normalize the security of isolation.

5- What is a great idea or practice you learned from someone within the Reformed world?

This is an idea from Ted Powers, former church planting coordinator in the PCA: make many points of contact. Some of them will work and others will not. But you are not likely to find the people God is working in through his Spirit if you sit in your office waiting for them to come to you. For example, make it a point to make at least one new contact each day.

6- What is the most “successful” outreach thing you’ve done or what has most contributed to your “success?” —not necessarily you personally, could be something you’ve implemented in church life or a collective church practice or approach.

The most effective thing for me has been serving as a police and prison chaplain. In each of the three places I’ve most recently served I’ve become a police chaplain, and in the first two instances started the chaplaincy program. Neither of the police chiefs in those departments were Christians, but they still valued (as many people still do in our culture) the helpfulness of religion. My agreement with the chiefs was not to instigate proselytizing conversations, but if the officers asked about my convictions I had absolute freedom to respond. Because of my involvement in the departments, I officiated at weddings (with a gospel message), had debriefing and counseling sessions with officers who were experiencing trauma, spent many hours in deep conversation on ride-alongs, and developed good friends. In each of those two departments, there were officers who became believers in Christ and began attending worship.

Corporately, the most important thing I’ve done as a pastor is to encourage the development of a small group ministry with the expectation that these groups are the natural onramps for people who are new to Jesus and our church. As the gap widens between church and culture, it seems critical to me to create a place where people can hear the gospel and watch its validating impact on the lives of other people. I would much rather focus our attention on efforts that are part of the normal rhythm of our church and lead to natural discipling relationships, and then supplement those efforts with intentional outreaches into our community that signal to the unchurched that we are a place they can come.