This is week 2 with Richard. If you didn’t read last week, here is more about him or skip down to the final portion of the interview.

Richard Ellis is the pastor of Faith OPC in Elmer, NJ. He grew up the son of an OPC minister 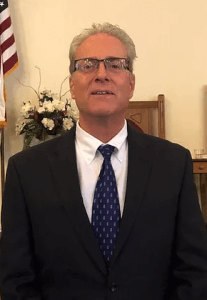 in MD. After attending Covenant College & Westminster in Philadelphia, Richard would later plant an OPC church in Frederick, MD where he served for 24 years. He was also a part-time RHM in the Mid-Atlantic, helping to plant several churches in the region. Richard and his wife of 46 years, Gayle, now live in Elmer, NJ and they have four “outstanding” adult children.

We have hosted video seminars that address the needs of our community. We had canvassed one neighborhood near the church to ask what topics they would appreciate the church addressing. Examples of such seminars: personal finances, peacemaking, marriage, and parenting.

5. What is a great idea or practice you learned from someone within the Reformed world?

From Jack Miller: Evangelism is one beggar showing another beggar where they’ve found bread. When you can link to the mercy of Christ to your own sin or weakness due to suffering, you then have a natural point of contact with your fellow sufferers and sinners. For example, I was sharing the gospel with a neighbor and couldn’t find a hook she was able to relate to that would show her need for Christ. She couldn’t see that she was a sinner, so saw no need for a Savior. I shared with her how I had a big struggle with anger early in my marriage, and deal with it still. When I gave an example, she replied, “Oh, me too.” Now, there was a perceived need for the righteousness of Another.

6. What is the most “successful” outreach thing you’ve done or what has most contributed to your “success?” —not necessarily you personally, could be something you’ve implemented in church life or a collective church practice or approach.

Far and away the most effective means the Spirit has used to bring people to Christ, to the church, and into discipleship relationships is by people reaching out to their own sphere of family and friends. This was the case at my first church in Frederick as well as at my present call in South Jersey. We are in a rural area with few neighbors and very few “walk-ins.” A member invites a friend or relative. A young woman brings a young man who has a romantic interest in her. He realizes Christian faith and church involvement are part of the package. He asks me to evangelize and disciple him, though not in those words. He is converted, is baptized, and becomes part of the church. The son of a friend of one of our members asked me to explain the gospel when he saw changes in his mom. They were converted and I performed their wedding, too.

People have recently come to the church as part of members leading Bible clubs in our local elementary schools through the sponsorship of Child Evangelism Fellowship. Some families have visited Faith Church. One family has recently stuck, not because we taught their kids in Bible clubs, but because our leaders developed relationships with both children and parents and have personally invited them to worship.