God answers the prayers of his people as they gather as a church to seek His favor.

Recently, Jay Bennett, pastor of Neon Reformed Presbyterian Church in Neon, KY told us a story—a remarkable story of God’s faithfulness. Neon, KY is a rural region of Appalachia. It is very rural. It has some of the classic traits that may come to mind for that region of the country. It was a coal region that fell on hard times and got forgotten by the rest of the country. Along with the difficulties of financial depression and cultural isolation, Eastern Kentucky simply has not had any Reformed churches—anywhere.

In 2000, a group of mostly transplants to the area began to meet for worship. Fueled by a desire to “simply study the Bible” and aided by Ligonier Ministries, this group got connected to the OPC and eventually was received into the OPC. Their first “official” meeting was on April 1, 2000.

Over the years they were served by many in that core group, but as for pastors they’ve had two. John Belden served there for 6 years and the Lord blessed the labors of the church. They were able to become a part of the community, reach some people, acquire their building, and grow in their love and service to the Lord.

In 2012, Jay Bennett was called to serve in Neon. During that time, building on the faithful labors and hard “spade work” of the earlier years, the church reached the point of being a majority of locals for the first time—a milestone in the life of the church. During Jay’s time as pastor, through some clear providences of God, he was able to grow a ministry to a local college. Over 6 years, it was a ministry that would bring 13 students to be members of the church plant.

One student, a young man that Jay heard teach one night at the “big group” meeting, is the focus of this story of God’s faithfulness. Jay appreciated Corey’s teaching ability and his evident humility. Jay invested in Corey and told him that he and the church were there to help Corey in any way they could as he pursued his call to ministry. Corey came from a background where if you believe you were called to preach, that was enough, and you preached. As Corey and Jay spent time together, they talked more about how Presbyterians view the preparation and call to ministry. Corey appreciated what he heard. To paraphrase Jay telling the story: “I told Corey, I don’t know what God’s plan is for you, but let me tell you Jay’s perfect plan for Corey. You are going to come under care of the presbytery, go to the seminary, and we will help you. Then 4 or 5 years down the road you will come back and there will be a core group here and you will plant a church and we will be church planters together just down the road from each other. It will be great!”

Though a different world from Corey’s former way of thinking about ministry, he embarked on the journey. He came under care of the presbytery and then went to seminary.

On April 2 of this year, Corey was licensed to preach in his home presbytery and is about to serve as an intern in a church plant in the presbytery.

Seth Long, one of the founding members of the core group and a ruling elder at Neon Reformed relayed another tidbit to pastor Jay after that presbytery meeting. Seth told Jay that he remembers that prayer meeting on April 1. 2000—the first “official” meeting of the core group. Seth said that he remembers that they prayed that night that God would raise up men from the local area to be preachers of the Word to the souls of Eastern Kentucky. Think about that. Corey is the first affirmative answer to that prayer!

Praise God for His Faithfulness. 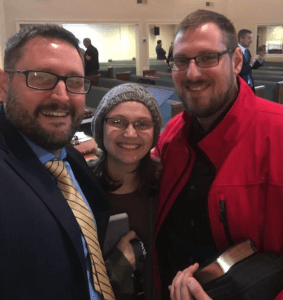 (Pastor Andrew Bennett on the left with Corey Paige on the right, and Corey’s wife Andrea)