As the September issue of New Horizons gets released in the next few days, readers will see an article from John Shaw about communication. There is an attached advertisement about a new, related series here on Outward OPC for this fall. That series will formally start next week with a podcast episode with John. 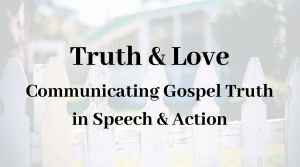 For those who haven’t yet seen the New Horizons article, keep an eye out for it. For those who are coming here from that article (and for all readers), we are giving a little taste of the series with a couple of quotes to get you thinking. Here are a couple thoughts from John Shaw to whet the appetite:

(On recently teaching Thessalonians) “I saw these images of Paul’s ministry that shouldn’t have been that surprising to me…but it was interesting to see him focus on the image of a mother and how she’s gentle and caring for her children and the image of a father who loves and cares for his children. And it was interesting in part because a lot of times when we are thinking about ministry, we’re thinking about things like the prophetic voice and having to confront error. And we can fall in love with the images of battle and courage and fighting. And to see Paul as he’s speaking to this young congregation express images of gentleness and care–that was an important reminder to me and I think it’s useful.”

(On patience in building relationships) “This is one of the ways that Christians can stand out. How many people in the world are willing to invest years and years in their neighbor simply because they believe that their neighbor is valuable? People notice it. It’s different.”

(On James and the tongue and social media) “A little spark can set a whole forest on fire. That’s sometimes what we are doing on social media when we attack a person or an idea without respecting the person or the idea in the way that is deserved. And in so doing we set fire to relationships. And I bet some of you have examples of that, that you’ve seen or even experienced where relationships were completely destroyed because somebody typed something.

Look for lots of expansion and application of these and other topics in the weeks to come.
Share this post...