We recently checked in with Calvin Keller, the church planter at Harvest OPC 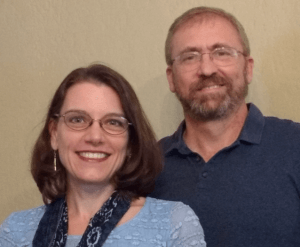 in Winston-Salem, NC. Calvin just recently moved to Winston-Salem to take the call and has been on the ground for about 6 months.

Upon moving to NC, Calvin and his wife had to temporarily live in an apartment complex and as Calvin told us: “he thought in God’s providence he ought to do something with that time in the apartment.” So he decided to knock on doors and invite people to a bible study. He knocked on 47 doors with a real simple invite: ”I’m your neighbor. I’m a pastor and would like to invite you to a bible study I’m leading.” This led to further discussion, but that’s how he initiated the encounter.

So, how many people showed up? Calvin was expecting 0. But the Lord brought 6 people to the study. It was a mix of Christians, nominal Christians, and one clear unbeliever. Out of this group, Cal and his wife developed a relationship with the unbeliever-an older woman who had a very difficult life, having already lost a husband and two sons. This woman was in the Kellers’ home and came to church numerous times. They had very open and honest discussions about life and the truth of the gospel. For her, there ended up being a stumbling block. She realized the church had a strong view of sin and she couldn’t get past the hurdle of believing that people are born sinners. She wrestled with this idea and talked with the Kellers about it but eventually stopped coming to church and is now moving a couple of hours away.

An interesting note: Of the 47 doors Cal knocked on, this woman was……door number…..47. (We’ll just leave that sit here).

Cal’s goal for any outreach bible study is to see people transition into the church. While that didn’t happen here, a number of good things came from the study. And Cal noted that he learned a couple of things from it. He was open and honest about the first one:

“I was knocking on doors to be faithful, but I wasn’t expecting anyone to show up. On the night of the study, I had an old bible study ready. But as the people showed up I realized the great mix of people (Christians, nominal Christians, and an unbeliever). I wasn’t prepared for this target audience. I ditched the bible study I had brought and did a study on John 3 – you must be born again. I realized that I needed to be more prepared for the types of people that would come.” (He also noted he needs to work on his expectations of what the Lord might do when he invites people to a study).

Having considered this lesson, Cal is now preparing to start a Christianity Explored bible study in particular because: “they have thought a lot about how to engage unbelievers and I appreciate that.”

Cal is also beginning to reach out to the Wake Forest campus. While you

need permission to host something at a private school, Cal looked up some off campus housing connections and showed up one day….and you guessed it—knocked on doors. About half the doors opened and of those many were receptive to talking and the idea of a bible study. Cal used another tailored, simple opening line: “I’m a pastor. My church is literally down the street and I want you to know that if you aren’t involved in church you are missing out on something great.” Conversations went from there. The students are gone for the summer, but Cal hopes to start something in the fall when they return.

We are thankful for Cal’s honesty in assessing this early work in the life of Harvest Church and hope it gives instruction and encouragement to others—both pastors and members–at taking some simple, every-day approaches to being more evangelistic. Cal noted that one of his constant goals for this young mission work is to realize and own the idea that we can be both reformed AND evangelistic without giving up our reformed doctrine. We look forward to checking in down the road on what happens with the Christianity Explored study, campus outreach, and other opportunities that will develop in coming days.