Have you caught an update in Home Missions Today 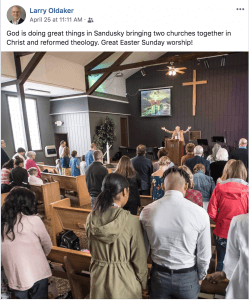 or on Facebook about what’s happening at Grace Fellowship OPC in Huron, Ohio with church planter Larry Oldaker?

After an extended season of discouragement, God is bringing another congregation in the area to join and be a part of Grace Fellowship. They have 21 people in a new membership class, and there is an energy and excitement in the growing congregation!

Last October, we talked with Larry about his consistent efforts to engage people in conversation—on the pier and in the town. Those posts focused on how to start and develop conversations. (If interested, posts: Part 1, Part 2)

And so, now 7 months later, it’s interesting to note what God is doing in Huron. There will be opportunity down the road to perhaps tell the whole story of two congregations coming together, but today we want to narrow in on one aspect of this story.

Isn’t it interesting that Larry was consistently and persistently faithful in meeting and talking with new people, saw no results, and now God brings not one or two people but a whole congregation to them?

How does that strike you? Odd? Frustrating? What if you were Larry? Would you have given up and moved on? Would you have stuck at it, but maybe begrudgingly like a youngster eating his vegetables?

We think what seems like an odd twist to us, sounds just like how our God tends to do things. And Larry agrees. We checked in with him last week just to get a couple of thoughts as he is seeing this amazing work happen and trying to process the mysterious ways of our Lord.

We asked him only about this seemingly odd circumstance of how he worked in one direction and, to this point, God has blessed in a totally different direction.

He told us that it reminds him of the first couple chapters of Second Corinthians where Paul talks about things like: the Father of comfort who comforts us so that we might be a comfort to others; and of our being, “… a fragrance of His knowledge in every place…among those who are being saved and among those who are perishing…and who is sufficient for these things; and that,  “…we have this treasure in earthen vessels, that the excellence of the power may be of God and not of us. We are hard pressed on every side, yet not crushed…” And Larry offered this insight of how it applies to him:

“Now I am not stating I am the Apostle Paul by any means. But like him we suffer in Christ to be humbled personally and to show the grace of God to others. So, yes, I was pressed and in near despair (regarding the church plant). I once again was taught to come to the end of myself and to rely on God’s grace. I was being taught again to trust in God’s grace and to really believe in God’s grace. I was pushed to struggle and wrestle in long periods of prayer. I had to give all the plans for Huron, all the experience (and any success) I’ve had, and everything I am to God’s sovereign plan. God wanted to do something here that we hadn’t even thought about. God had a plan for something greater than we imagined. I even prayed Ephesians 3:20. Just wow! Who am I to see this?”

We asked Larry how he might encourage others who may be discouraged in their church situation and not seeing fruit. Now, we all want to be clear that not every story ends with God bringing a congregation to your door. In fact, it’s quite rare. But here were Larry’s thoughts:

“I have often stated to others that we are to be faithful. God gives the increase. God often brings people into his church through a “side door” rather than through the “front door” of our evangelistic efforts. He does this just to show his glorious grace. I’ve seen this before but never on this scale. God doesn’t promise worldly success. He uses our failures for his glory. I was willing to accept that. I had to be humbled enough to give it all to God, to accept what looked like defeat in trying to be faithful to God’s glory and purpose. That is a hard lesson to learn. I had to learn it again. I had to be humbled again to know that God doesn’t need me. He can put me aside anytime he wants and that is okay. And then I had to be humbled to see that God wants to use me despite my failings and weakness. Whatever happens here, the praise belongs to God. I am just overwhelmed to see God work in the lives of these people. In the end and in the middle of trial be humbled and trust God to work for his glory.”

If you are in a church situation that is thriving, we hope this story is a blessing as you hear of the Lord’s work in this OPC congregation. If you are in a difficult circumstance and perhaps discouraged, we pray you will be encouraged to persevere in faith and keep working faithfully while seeking the Lord. We hope Larry’s words “from the field” might connect with you and be a help and encouragement.