Last week, we looked at how Larry Oldaker approaches initiating conversations (Part 1) and saw a couple of helpful points to note (reading response/body language & prayer). Today we continue with examples Larry gave us of particular conversations—how they started—but then also how he developed them beyond 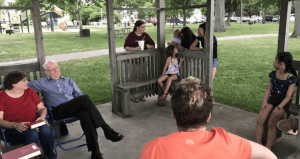 So, how do you take those next steps in the conversation? Whether with people he knows and sees regularly or strangers, Larry is always looking for the opening to naturally talk about meaningful things. He finds that those openings often come with something they say that he has in common with them. A few examples:

Larry: Pleasantries about the fish biting and the weather

Larry: You from here or just visiting?

Fisherman: I haven’t lived here in 20 years, but I’m back….I was in SC as a firefighter

Larry: Talks about dad and brother……then says, boy you must have seen people in very difficult times

Fisherman: Yeah, it’s weird I’ve seen people die going 35 mph, and others driving 80 and hit a tree and walk away.

Larry: Kind of makes you think somebody is in control of things….

Fisherman: Yeah, I believe it….in God…..some firefighters say you can see the devil in the flames…..

Example 2) Financial advisor he sees regularly at the diner

(in a regular weekly conversation that happens at the diner)

Financial: Talking about investments and making sure you prepare for the future

Larry: Interesting…..so a question…. are you prepared for the future

(conversation continues in spiritual direction even if slightly awkward)

Clerk: Ah, no…..my nephew is having trouble with drugs ….

On this last example, the clerk didn’t know much about Larry, but as Larry puts it, “now he knows I’m not just Larry, but Larry who is concerned and takes the time to care.”

An interesting note here as we close: Anybody who knows Larry would think he’s

a natural at this stuff. If you meet him, he seems like a natural. But Larry told us that’s far from the case. He does like to listen to people tell their stories and likes to talk, but he is not a natural at initiating conversation. He said he has to “sweat it out, think about, and get up the courage.” And he has to be very attentive to how people respond in terms of eye contact and body language so he knows whether they are open to talking or not.

A final note: We asked him why he does this and continues to do it. He said he does it because people are valuable. They are created in the image of God, and you have to love and be interested in people. Larry said he’s genuinely interested in people and their stories and experiences and hopes, PRAYS, and looks for opportunities to share more than chit-chat with them.

We noted last week that these principles aren’t exactly revolutionary. Larry probably won’t be charging thousands of dollars to teach on his approach. But there are some real practical notes in these two posts that will help most people to be better in this area. For people wanting to know how to better start conversations and further them along, there is no formula. It’s, as they say, better caught than taught. Hopefully, this gets us started and we can hear from others in the future.