Readers of New Horizons may have seen the article on the church in Neon, KY a couple of months ago (p.13 of this pdf: New Horizons August 2018). This week’s Stories from the Field digs a little deeper into the outreach mentioned in that article which has been fundamental to the development of Neon Reformed Presbyterian Church.

There are two Bible studies and their related events that are at the heart of the outreach in the Neon area. There is a bible study at Alice Lloyd College that Pastor Jay Bennett leads each week. The development of that study and growing connection to the campus has also spawned a “walk-up” evangelism outreach that Jay and a couple of students do each week. The second study is a burgeoning group in nearby Pikeville that has gathered a diverse group of Christians who to this point have no church home.

At Alice Lloyd, each week Jay and usually two other students (who are part of the church in Neon) head out onto campus. First, they pray. They choose a “question of the day,” and walk around to talk to students. A recent example: The question of the day was: Have you sinned? On this day, they talked to 8 or 9 students at some length. Every one of them answered: yes. Prepared to continue, the next question was: Does that make you a sinner? All said yes. The final question was: What does that mean for your position before God. From this, they were able to interact and present the gospel to the students.

They initiate by walking up to students and saying something like, “we are out here asking people a question of the day, could we ask you?” Jay reports that virtually everyone is willing to talk. The closest to getting shutdown is somebody being in a hurry and not having time to talk. This is their third year doing this and a safe estimate would be that they have had 750+ meaningful conversations doing this. Many aren’t just one off interactions. Alice Lloyd College is small and Jay and fellow partners are intentional to remember people, know their names, follow up on FB, and look for them each week when they are on campus. Many times they see somebody another week and are just able to hang out and chat for a couple of minutes.

More formally, Jay leads a bible study on campus for Christians. They are currently studying a book on the attributes of God. Sometimes the students they engage from the walk up evangelism will visit this bible study or one of two small groups that run on campus each week.

Over in Pikeville, this more recent study has seen 10-12 people attend in the first 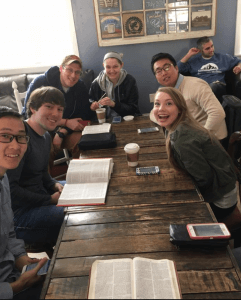 year and a solid group of 4-5 core members. Given that Neon is in the heart of the Bible belt, most of these people have diverse church backgrounds and varying level of interest in Reformed theology.

An interesting note for both of these areas of outreach: Jay is a participant on a Facebook group for their eastern Kentucky region that is a question and answer forum for theology. Through that FB group, the Lord has connected Jay to a young man that has become a member of the church and is a fellow evangelism partner at Alice Lloyd and another man who is part of the core of the Pikesville study.

We asked Jay about the fruit from these outreach opportunities. His first reply: 7 students have joined the church and by the time you read this it will, Lord willing, be 9. Two more were a part of the Pikesville study and moved away. And a young man in the Pikesville study is now at Greenville Seminary preparing for the ministry with a desire to come back to the Appalachia region when finished.

We then asked him about the fruit for his own life and ministry and that of the congregation. His answer is telling: “These engagements on the campus and in the world are so energizing. They are the highlight of my week. Spending time with students and people hungry to learn new things and study the Word is so energizing.” About the congregation he also used the word “energizing.” Before Jay arrived, the church had been without a pastor for about two years and there was a bit of a stagnation and lethargy. The Lord has used these outreach ministries in many ways to reinvigorate the church. For starters, the church has nearly doubled in size in 6 years from 25 to 50. The church has learned the power of prayer and to trust God to build his church. And they’ve gotten to SEE it happen. And they’ve also seen that a Reformed church, lacking in hip worship and no band, is reaching young people who come to the church and love it and are fed! Numerous students have so taken to things that they view the Sabbath as a staple and central role in their life as students. One of Jay’s favorite stories is when one of the students who is now a member first visited the church. He told Jay that when they started the service with a moment of silence to prepare their hearts for worship, this young man had never experienced that in church. And his response was that he knew he found a home.

That is definitely quite a bit of fruit. And for people who know anything about Neon and the history of the church there, they are the only Reformed church in the area. It’s the heart of the Bible belt. Jay can count on one hand the times he’s met a completely unchurched person while doing these outreach efforts. The Lord is using the OPC’s reformed witness to take a divergent group of professing Christians and give them stability in discipleship and help foster their growing reformed commitments. In a large urban area of the US, we talk about reaching the unchurched and rightly so. In Neon, sure there are unchurched and the folks at Neon will hopefully meet more and more of them, but in this phase of their church life God is bringing them diverse groups of under-churched to reach.

Jay makes it clear that one of the things he loves about the outreach in Neon is that he doesn’t understand it and doesn’t know what God is doing. He just gets to sit back and watch. Of course, he would never say it, but we will: He and the folks in Neon are doing anything but just “sitting back and watching.” Out there on campus every week, leading a couple of studies, corporate prayer dedicated to the outreach….that is keeping them busy. So they are far more intentional than they may let on, but through their consistent, steady, faithful efforts the Lord is blessing and allowing them to see the fruit.