What comes to mind when you hear the word “evangelism”? Do you imagine a scenario where a Christian shares the gospel with a total stranger? While this is not uncommon, it is certainly not the only way evangelism takes place. It is also not uncommon for many Christians to feel frightened by the thought of witnessing to a stranger, but there’s no set rule that you must start there. Travis Yonkman, pastor of Grace OPC in Hamilton, NJ, gives us the simple

encouragement to begin by praying for people we already know and trying to find ways to share Christ with them.  He himself has sought to do just that, and now shares one story of the fruit that has come from this practice.

I’m not overweight. However, the work of a pastor is so delightful and important that I could easily justify reading, writing, speaking and spending time in fellowship all day long (which wouldn’t leave much room for movement!).  So, fearing the results of that sort of sedentary lifestyle, about two and a half years ago I decided to hire a personal trainer.  My wife, who works at a local YMCA, introduced me to Brian.  When we met he said that he was looking for a workout partner and, if I wanted, we could just work out a few times a week instead of paying him to be my personal trainer.  That was the beginning of my friendship with Brian.

Working out provided an excellent venue for conversation.  It didn’t take long for me to be able to tell him that I’m a Christian and what that means.  Brian, like many people I’ve met in central NJ, was a non-practicing Roman Catholic.  He agreed with everything I said.  I told him the basic differences between Roman Catholicism and the Scriptures.  He agreed at every point.  I told him about his sin before a righteous God and how faith in Christ was his only hope.  He agreed.  We talked about how the Scriptures make sense of everything in life.  He agreed.  I bought him a Bible and gave him passages to read and discuss.  He agreed at every point. But nothing changed.  He didn’t worship God.  He didn’t profess his faith for Christ to anyone.  He didn’t lead his family toward the Lord.  Nothing.  I told him all this many times and he simply acknowledged that there was no change.  This frustrating period went on for about 6 months. I felt like, after a year and a half of our friendship, we had talked about EVERYTHING and there was nothing more I could do.

Eventually I asked if he would be willing to get together specifically for the purpose of reading through large portions of Scripture and discussing them.  He agreed, so we began to meet late Thursday nights at Applebee’s to do just that.  I walked through the prophecies of the Old Testament, beginning with Isaiah 53, showing how Jesus fulfilled them and how astonishing it was that he 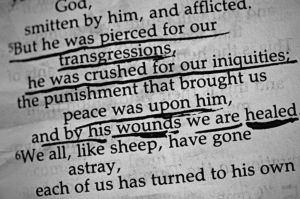 fulfilled all of them. That turned into him coming to my house every Thursday night.  Finally, one Friday when he was by himself at work, Brian found himself thinking about how he would explain our latest conversation to his wife, Keri.  (After our conversations, Brian and Keri often spent hours discussing what we talked about.)  As he thought through how to explain Romans 5 and being born in sin, he suddenly realized that he was a Christian.  The realization overwhelmed him with so much joy that he stood up and said aloud, “I’m a Christian,” then continued joyfully saying out loud, “I’m a Christian!”

From that point forward (that was in November 2017) Brian has passionately been a Christian.  He, his wife, his eight-year-old boy and his six-year-old girl began worshiping at our church and have continued to do so ever since.  Through Brian, and partially through my family, and me Brian’s wife Keri became a Christian about two months ago.  Their conversions thrill me for numerous reasons, but one is simply the fact that we are so different from each other. Brian and Keri are tattooed extensively and grew up in circles completely the opposite of mine. Some groups of people, when left to themselves, will naturally stay away from other groups. This is no less true for Christians. The temptation not to reach across social circles can be strong. But part of the beauty of the gospel is that it breaks through those differences and unites all people into one family. When God redeems people from all walks of life, it reminds us that the identity of our church is not that we all look the same, but that we share a common Savior.

We have recently held an incredibly powerful and encouraging evangelism seminar for the purpose of considering how we can share Christ with people in our lives.  Brian attended and not only did he love it, but it was great to see fruit right there with us.  I plan to make it an annual event with other OPC churches inviting three or four pastors to each come speak about evangelism as we encourage each other to share the glories of our Lord and Savior.  We trust the Lord will give us more stories of bearing fruit to continue to share as the years go on.

What about you? Who do you have in your life that does not yet know the Lord? Pray for them and for opportunities to share Christ with them.