In this series of posts, we will consider the practices of other churches that share some similarities with the OPC, though also some significant differences. With some of the examples (ten in number), we may see some ways in which their practice is inconsistent with our doctrinal commitments, but also hopefully learn from these brothers and sisters in Christ. In particular, we hope to learn more effective ways to welcome new people into the language and culture of our worship, practice, and life as a church.

Let’s get this one on the table well in advance of late summer and fall community festivals and street fairs. If it’s a helpful idea, sessions and outreach committees can think about applying it for their next effort. We’re stepping outside of ideas for Sunday in your church building for this one, but it’s just as relevant to the series.

Street Fair/Festival Booth: I heard a PCA missionary (serving an Indian reservation in the US) tell a story about their outreach at a community festival. They were thinking along the lines of a typical booth where they could meet 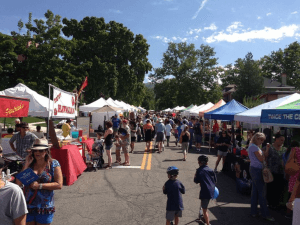 people—maybe provide water or something needed with an opportunity to talk with people. Having attended once and not had a huge success, they paid attention to the culture of the festival and what was needed. They realized that there was no place for diaper changing. Moms and Dads had to go into a port-a-potty if they wanted a private area. It was difficult and unpleasant. So, the next year they set up a station that had private AND pleasant areas as changing stations. It was a HUGE and overwhelming hit. People were extremely thankful and it made them very open to talking. As people waited in line, the missionaries had numerous meaningful conversations with people. Since they didn’t have any literature to hand out, it was just genuine interest in talking to the people. They considered it to be a far greater success than when they had a “normal” booth and continue the practice each year.

Initial Reformed Reaction: Probably nothing of note. Maybe that we would like to have something to give them gospel-related, such as literature.

Principle That Transfers: Street fairs and festivals seem to be a popular place for many of our churches to try to meet and serve people. We tend to think about how we can give them something they want – water, snacks etc. and something we want—Reformed literature and info about our church. This PCA missionary was thinking similar thoughts and after limited success, took a step back and put his focus on simply how they could serve the crowd and only what they needed to have a better experience. Focusing on serving the crowd actually opened up more opportunity for deeper interaction than any literature could provide. If we are having limited success in these venues, maybe we could take the same approach. We could put aside what “we would like to give them” and think about it solely as a service project to connect to people and the community. Is there something missing or a need we could fill? What’s needed to make the festival experience better? Provide the service; the interaction and connection will follow.