In Part 1 of our series on James K. Smith’s You Are What You Love (Part 1), we considered Smith’s thesis that people at their very core are most significantly formed by what they love. What a person loves is more formative even than what they think or what they believe. We narrowed our focus to how this thesis affects how we, as Christians, view unbelievers and what makes them who they are. Using what Smith calls “liturgies”—repeated, formative practices or rituals that shape our love—we looked at how the shopping mall can powerfully form a person. Today, we take a second example, the University, to explore what forms a person and how that helps us understand the sociology of the world and people around us. Let’s allow Smith to frame the picture:

“The university is an experience, a rite of passage, a glandular adventure, both a postponement and a rehearsal for the proverbial real world.”

“The rhythms of football season and basketball season provide year-long opportunities to reinforce a tribal competitive instinct, as well as a rhythm that makes education something one “fits in” to what otherwise really matters at college. Dorm life will be yet another incubator of habits and practices, providing opportunities to learn nocturnal habits of cliquishness, or other habits of avoidance and isolation.”

“And so the university experience ends with a commissioning; not quite a “Great” Commission, but something close. We are launched into career (and careerism) by the holistic formation we’ve received at college. The classroom and laboratory, lecture hall and library have played some role in this. But the information provided there has not been nearly as potent as the formation we’ve received in the dorm, and frat house, or the stadium and the dance club.”

Not too long ago, I was talking to a friend of mine—a PCA family, solid family. They have several kids and the boys are very involved in sports and the Dad is a sports fan. So, their oldest daughter was around sports, but never really picked up much of the sports fan gene. Well…until they took a college visit to Auburn. He narrated the visit something like this—“You know it was a nice campus and the tour was fine, but they know what they are doing…it came time to end the tour and they took us into the football stadium—like down on the field through the players entrance. And as they were wrapping up the time—it was parents and kids—they talked about the football team—the season and rituals and it ended with the war eagle flying in on a b-line to the center of the field (you know, just like they do at home games)…..and I thought it was pretty neat….and my daughter looks at me and says, “Cool!” 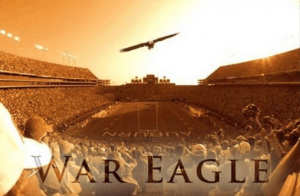 About a year later, I asked him again how her first year was, but I asked in particular how she took to the SEC culture of football. Before I could finish the question, he jumped in “Oh, yeah, she got it. She’s totally into it. She goes to every game…dresses up a certain way, goes with her friends…she came home at Thanksgiving and of course the Iron Bowl was that weekend and she wouldn’t miss it….she’s definitely into it.”

And that’s just for lowly Auburn!

And that’s just one story, from one person, from one area of college. Many of us have similar stories from college—stories….rituals….loves….that last a lifetime.

How did the university liturgies form you? What are you still doing, following, or a part of you that the gospel according to the campus instilled in you?

What insight might this give us into engaging Millenials and GenZ who are more recently coming out of this liturgy?

Our next post in the series will start to explore specific application of these principles from parts 1 & 2 of this series. What would be your first couple points of application in terms of how it would change your approach to interaction and relationships with unbelievers? Start thinking.