We continue our series of highlights from the Church Planters Conference in St. Augustine. Last week, we considered some matters relating to “Building A Culture of Evangelism” in our churches (Link). During the same session Eric Watkins, the host pastor, led a brief discussion on the role of preaching and evangelism. 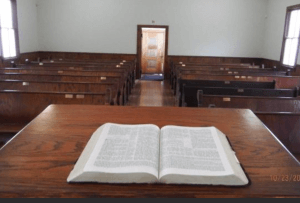 Eric had an interesting take on this topic, perhaps different from what you might think. Eric set the tone with a story about Steve Lawson. Steve is a teaching fellow with Ligonier Ministries and a pastor who is committed to a Reformed Baptist theology. Steve was asked at a conference if he could say one thing to his Presbyterian friends what would it be. Steve hesitated to answer a number of times, but when pushed said “your view of conversion is too weak.” A striking answer to the conference crowd, as they would have expected him to say something about baptism. What did he mean? Eric suggested that it was a reference to preaching–that Pastor Lawson was saying something to the effect of—you are preaching to the baptized and you are not calling for conversion.

Whatever you think of that story and that answer, it’s worth considering whether the sentiment is correct: Do we get wrapped up in preaching to the baptized and neglect calling for repentance and faith? And if we do call for conversion is it in an effective and fresh way, not succumbing to one or two tacked on lines when we do touch on it?

Eric pointed out that we believe that the pulpit is the primary place where conversion happens. (Shorter Catechism 89:)

So, if we believe that, are we preaching consistent with what we believe?

This is an interesting and refreshing angle of approach to the question. Usually such discussions of preaching and evangelism hover around whether the worship service and its various elements are for the unbeliever or the believer. The standard response is that the service is for the believer so we don’t make accommodations and ‘dumb things down’ for the unbeliever. But Eric’s point and way into the discussion sets that whole debate to the side to ask the question: Are we preaching consistent with the fact that we believe the pulpit and the preaching of the Word is especially where God blesses and does the amazing work of convincing and converting sinners?

We find ourselves in this current climate with concern for losing people and especially the younger generation over the question of “being more Reformed” or going down the road to “be more missional” and that shouldn’t even be a dilemma. We need to preach to the baptized and the lost in accord with the very thing that makes us Reformed. Reformed preaching must seek to convince and convert sinners by the power of the Spirit working through the preached Word.

Eric’s doctorate work was in the area of postmodernism and preaching the Old Testament. He offered some thoughts and led a discussion from which we pull out some main points:

A shift happened in the postmodern world. The “modern” mind was focused on 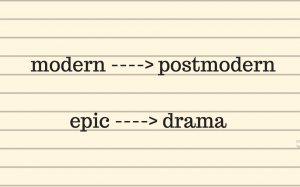 the epic. You told the story. Here are the facts and here is what you do. But postmodernism brought a shift to the more subjective—from epic to drama. The drama looks for the audience to come and participate in the drama.

Pause for a question: Do we have anything that helps us preach to people who are looking for their place and whose mind and worldview have shifted from the epic (facts and what to do) to the drama (come and participate)? Take a moment to think about that before you read on.

Eric emphasized that when we come to the Scriptures, we realize several things:

Every text is part of a bigger text and part of a bigger narrative. We all have a relationship to the text–with the script so to speak. Everybody is part of the story. Are you preaching in a way that shows the unbeliever where he or she is in the story? Or are they watching from the outside as you preach a drama to the baptized?

We all have a relationship to the Bible and to the God of the Bible. It’s either submission or subversion. Understanding or “Overstanding”

To take the drama metaphor, everyone is on stage but the story isn’t about you. It’s about King Jesus and you are either a loyal servant or a rebel beating against the wall.

Redemptive Historical preaching (properly understood) is incredibly evangelistic because it draws them into the grand story of Scripture instead of giving them the facts and telling them what they need to do.

Now, for preachers reading this post, where do you begin so this doesn’t become yet another thing you’d love to do and work on, but don’t know where to begin and grow frustrated.

1) Listen to good examples of this type of preaching. Some names that come to mind are Sinclair Ferguson, D.A. Carson, and Tim Keller in the right circumstance and the right sermon could be helpful. Let’s throw a mere mortal in the list too. Since it is Eric talking about the topic maybe check out one of his sermons. Here are a few links that may point you in the right direction.

Carson, The God Who is There

2) Take one of your most recent sermons and think about it under the parameters of this article. Make some notes. What was the big story of the sermon? How did it connect to the bigger text and the bigger narrative? Where did you address the unbeliever and did you show them where they were in the story? If not, how could you have done it? Compare a sermon you listened to above with yours looking at the same questions. Maybe talk to one of your fellow pastors you know and listen to one of each other’s sermons and discuss.

This post is obviously geared to the pastors and preachers among us, but it’s relevant to all those that listen to preaching. In the near future, we will have a post about “Building an Evangelistic Culture” that is geared to the members and attenders of the church.