Consider these selected quotes that have been pieced together and we’ll say more about them below:

In the archives at Westminster Seminary in Philadelphia is preserved a handwritten sermon by J. Gresham Machen dated March 30, 1925. It deals with 1 Timothy 3:15 and is entitled “The Church of the Living God, the Pillar and Ground of the Truth.” In this sermon, Machen argues that the church is not an end in itself, but an agency for the propagation of the gospel. In the margin, in different colored ink, are the words, “Dr. Vos says this is wrong.” (Machen and Vos were colleagues at Princeton Seminary.) Perhaps Vos would have argued that the church’s priority is not evangelism but worship, as worship is the eternal activity of heaven, and evangelism is the temporary activity of gathering worshipers on this side of eternity. It is undeniable that the right worship of God was and is a central concern for Orthodox Presbyterians. Still, the question remains: how important is evangelism for the OPC’s identity? It could be argued that the OPC was established because of a concern for the propagation of the gospel. Evangelism is foundational to our church’s identity.

On June 11, 1936, the eve of our denomination’s formation, Machen sounded the church’s evangelistic call: 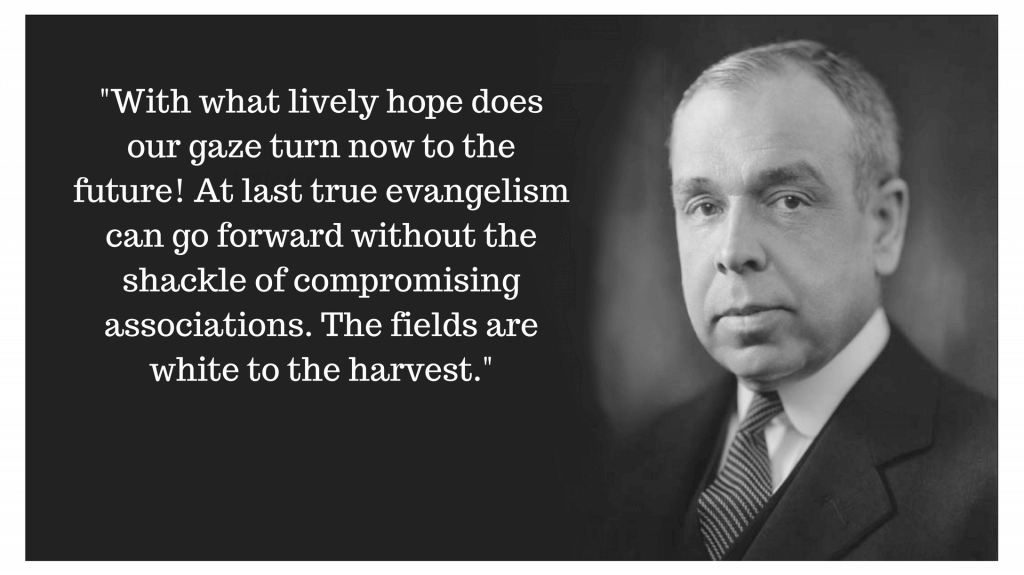 Though Machen died within a year, his evangelistic concerns did not die with him. The “flaming thread” of Machen’s life is part of the fabric of each and every Orthodox Presbyterian church. Clothed for battle, we continue to fight the good fight of gospel proclamation with the sword of the Lord in hand. Our church was born of evangelistic concern. It is foundational to our identity. Proclaiming the gospel is second only to our concern for the right worship of God.

Evangelistic concern and OPC identity are inseparable. Yet anyone who is familiar with the OPC’s story remains puzzled by God’s providential dealing with our church in her earliest days. Within a year of the OPC’s birth, Machen died. It would seem that the young church was left rudderless and without a captain. But God’s church is not dependent upon particular men; it is dependent upon God himself. The Lord who gave, took away, and then gave again. In Machen’s shadow stood Cornelius Van Til (1895-1987), and on Van Til the mantle of Machen was laid. The OPC’s evangelistic identity did not die with Machen. If anything, it was intensified and faithfully advanced by Cornelius Van Til.

According to Van Til, the OPC was brought into existence for an evangelistic purpose. In a 1968 sermon to the General Assembly, he said: 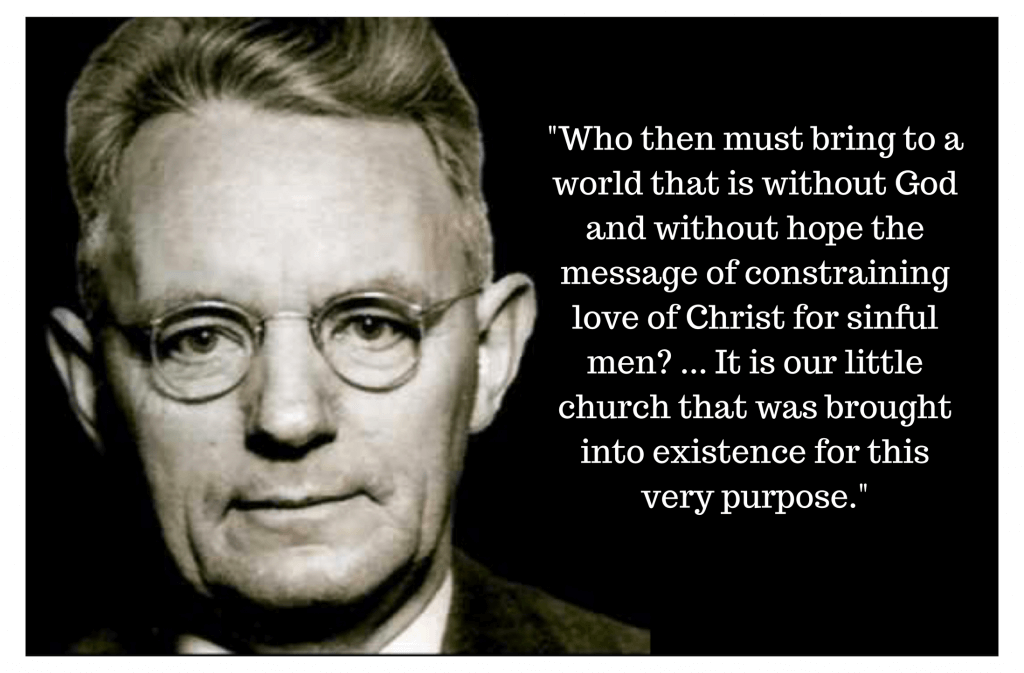 In a 1974 sermon at Calvary OPC in Glenside, Pennsylvania, he said to the saints, “To live unto him certainly involves bringing this message of comfort to those who are still in the clutches of Satan, who are still under the power of sin and are all their lifetime subject to the fear of death. For this purpose the OPC came into existence.”

The previous quotes are selected from a series of articles written by Eric Watkins, Pastor of Covenant Presbyterian Church in Saint Augustine, FL. They were published in New Horizons in 2011. After tracing the evangelistic thread through Machen and Van Til, Watkins third article challenges us regarding the continuing legacy of that evangelistic concern. He concludes the series with these words:

“I believe that God has given the OPC a splendid inheritance. I have never been more thankful to be a part of our denomination. We have an inspiring history, a glorious calling, and the highest motivation—the glory of God. Our church was forged in the fires of evangelistic concern. Those concerns remain. We have inherited the gifts and calling of those who came before us. At the risk of mixing metaphors, I will say that the battle belongs to the Lord, and that the fields are white for harvest. Our inheritance is secure and inexhaustible in Christ himself. How will we spend our inheritance?”

It is unlikely that anyone in the OPC would disagree with these quotes and this strong emphasis. More likely, hearty amens and head nods abound. But the questions do come in what we are doing with it. How is it to be implemented? What is the cost to reach people? Is there a cost to reach people? How are we our own hindrance to reaching people? How far do we reach into the unbeliever’s life and context? There is no intent to answer those questions here. We hope this furthers the conversation and stirs peoples’ thinking to go beyond head nods and amens and to continue to think and talk about what it looks like on the ground. These conversations are happening and we hope to prod them along.

If you are interested in the full articles by Eric Watkins, here are the links: